The biggest series of the season kicks off tonight at The Bank, as the second-place Bravos come to town.  And, the Phils are perfectly set up for the stretch run.

After a quick tweak of the rotation last week, the Phillies will now have the “Big Three” lined up to pitch all six remaining games against Atlanta, starting with Cole Hamels against Jair Jurrjens tonight.

What’s really amazing is that the Phillies, despite all their ridiculous issues throughout the year (a myriad of injuries, a faulty bullpen, having to play career minor leaguers in key roles), they are on pace for–get this–the franchise’s best record since 1977!  Yes, at this pace, this team will have the best Phillies record in a 33-year span that includes both of the team’s World Series titles.  Pretty amazing, if you think about it.

(1) They will assure themselves homefield advantage in any playoff series, including the World Series (thank you, Brian McCann).  This is important because the Phillies have been so incredibly good at home during the past two World Series runs that it really manifests itself as a nice advantage.  Furthermore, pretty much all of other potential playoff teams in the NL (Atlanta, Colorado, San Diego, San Francisco, and Cincinnati) are disproportionally good at home, so homefield could make a big difference in the NL playoffs.

(2) They will get to choose the NLDS with the extra off-day.  This one is actually gigantic for the Phils, the way they are constructed right now.  If they are able to take the 8-day, 5-game series in the NLDS, they can assure themselves of playing every Division Series game with either Halladay, Hamels, or Oswalt as their starting pitcher.  And, even though a team like San Fran can also throw a hefty three guys, no one has horses like we have horses right now.

One other note of interest–apparently, Jayson Werth is poised to hire Scott Boras as his agent.  If this is true, I think it’s safe to say that Dominic Brown and Raul Ibanez will be the Phillies corner-outfielders next year.  My man crush aside, I think that that’s probably best for long-term future of the organization anyway.  Jayson’s next contract will probably be far more than he’s actually “werth,” and Dom Brown is ready.

I know the baseball season just ended, but it’s college hoops already (I guess World Series trips don’t give us nearly as much of a “break,” huh?).  Everything is different under Dunphy than it was under Chaney.  Under Chaney, the Owls were almost always the last team in the country to start their season, and often didn’t play a home game until around Christmas.  Under Dunphy, they play early and often, including the requisite mid- and low-major teams as “warm-ups” (I’m not opining either way on Chaney’s schedule decisions versus Dunphy’s, just making observations).  Well, it’s only November 18, but the Owls are already two games into their season.

Now with back-to-back NCAA tournament trips under their belts, the Owls should return to, at least, a class of team that handles mid-majors early in the season.  Well, they did 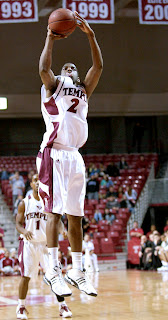 just that in their season-opener at the Carpenter Center in Delaware.  The Owls put up 76 points in a 20-point victory over the Blue Hens.  Ryan Brooks had 23 points, and Lavoy Allen pulled down 15 rebounds.  If this Temple team is going to secure its first at-large bid in recent memory, they are going to have to be carried by those two because the depth on this team is a bit questionable.  The newest Owl starter is Juan Fernandez, who is going to be a special player, and could be complete a solid three-man nucleus.  Fernandez, who is so calm and collected on the floor, added 14 points and 5 assists in 29 minutes.  The other two starter, Michael Eric (the big, raw Nigerian) added 7 points, and Luis Guzman chipped in with 8.  Two freshman, Rahlir Jefferson (a pure freshman from Chester) and Ramone Moore (the 2007 Public League MVP, who had an academic redshirt in ’07-08 and a medical redshirt last year) both played a solid 14 minutes.  Personally, I think that both are pretty decent options off the bench, with Moore being a potential starter by conference play.

Then yesterday, the Owls got to tussle with the nationally-ranked Georgetown Hoyas, down in DC.  Temple struggled to get going in the first half (as did the Hoyas–it was 19-13 at the half), but played a really solid second half.  They outplayed the Hoyas for much of the second half.  “Big Smooth” Craig Williams hit a game-tying three-pointer with 4:52 left, and it looked like the Owls were going to pull this one out, as they took and extended their lead in the closing minute.  But, back-to-back three-point plays by G’town’s stud sophomore, Greg Monroe, pulled the game close again.  The Owls did have the ball and a 1-point lead with :23 seconds left, when Ramone Moore was sent to the line for a one-and-one.  Moore missed the front end, and Monroe drove the length of the floor for the go-ahead basket.  The Owls got one last chance, but a Guzman turnover ended the upset hopes.

As good as Brooks was against Delaware, that is how bad he was yesterday, scoring just 6 points on 2-14 from the field.  Allen, however, had another big day on the glass, with 14 more rebounds (and 12 points).  Guzman didn’t score in 36 minutes, but Moore picked up some slack with 8 off the bench.  All in all, it was a solid effort for the Owls, but they will not be beating any good teams on the road with only 2 FGs from Ryan Brooks.

I would have to say that most encouraging thing about the first two games is the play of Lavoy Allen.  Now, a junior, he can no longer be talked about as “going to be good;” he has to be “good.”  And, he has been really good in the first two games.  One knock on him has been a bit of a lack of aggression on the glass, but he has 29 rebounds in two games, so maybe he’s solved that problem.  Allen has the talent to be a first-team all-A10 performer, so maybe this is the year he shows it.  The Owls will need that because you can expect Brooks to be streaky, and there is no way they can rely on Fernandez just yet.  Allen has to be the rock on this team this year.

It should be interesting in the next week, as the Owls come home for 4 games in an 8-day span.  They host two really good mid-majors, Siena (Nov 21) and Ball St. (Nov 24), before hosting the Philly Hoop Classic at the Palestra on the 27 & 28.  The Owls drew two big-conference teams with the ACC’s Virginia Tech on Friday and St. John’s, from the Big East, on Saturday.  If the Owls can take care of business (no small task) this week and enter the weekend 3-1, they can really put together a nice non-conference resume with wins in either or both of the games at the Palestra.

Gotta say that if the Phils can land a Cy Young pitcher without giving up Drabek, Happ, Brown, Taylor, or Knapp, then that’s a steal, in my book.  If they only have to give up Donald (not going to be very good and behind Rollins), Marson (probably going to be a decent ML’er), and Carrasco (who has flat-out stunk at AAA this year), then I love it.  In fact, I say F Halladay, or more appropriately, F RICCIARDI, have fun losing for the next decade, hoser.