So, as the Sixers finished off the Wiz and are now getting ready for the Hawks and, possibly, the Nets, it’s probably time to talk about what really matters – how hateable some of these guys are.  As you may remember the wrinkle of this regular feature, these lists are not opinion; they are fact and inarguable (tongue-in-cheek, folks, tongue-in-cheek).

So, without further ado, these are the Most Hateable Players in the NBA.

12). Rudy Gobert – This one is tough for me because I really appreciate how Gobert handled everything back in March.  So, I am a Gobert defender, but I have to be objective here since this list is factual, and it’s really hard to forget this: 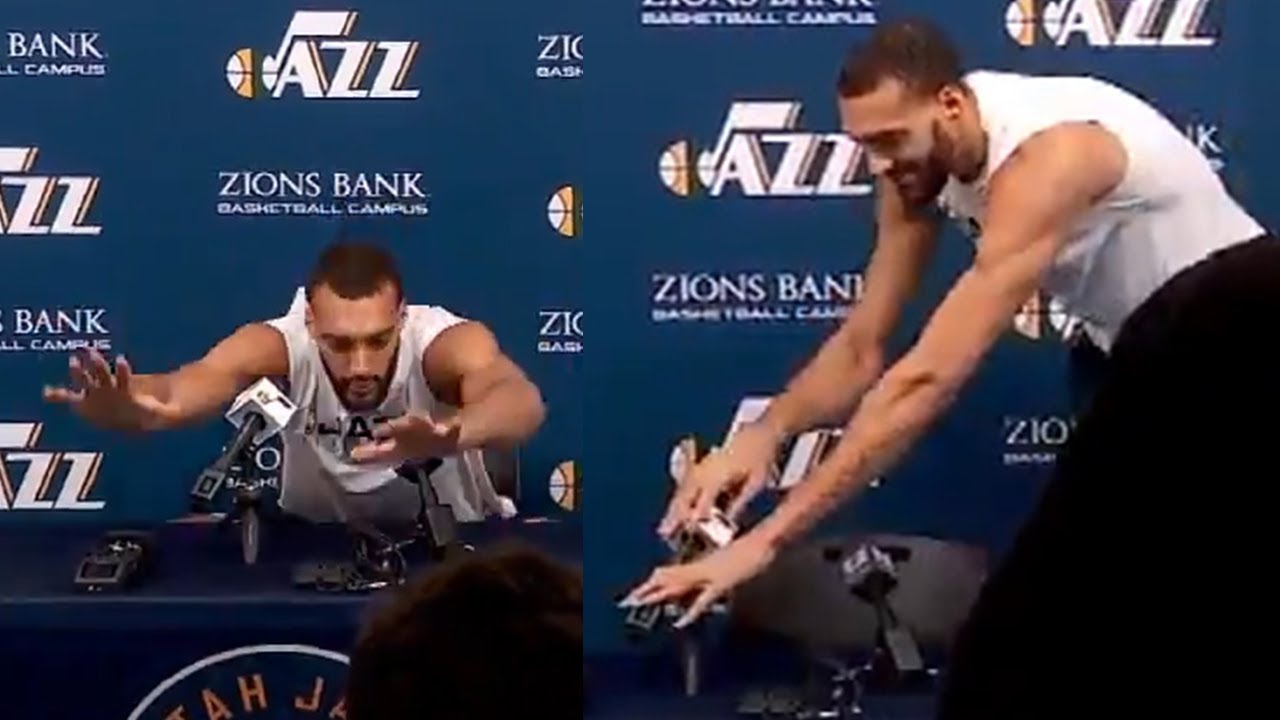 Like I alluded to, I think he owned his mistake, sincerely apologized, and seemed to be very earnest about how he realized how stupid he had been and whatnot.  And, I really appreciate that.  He was just VERY immature.  But, ya know…COVID…so, he’s gotta be on this list.

11). Russell Westbrook – To quote Doogan:  “Westbrook:  19 pts, 21 reb, 14 ast, 3-19 from the field, you weirdo.”  But, he’s a weird dude with a weird game that is, somehow, simultaneously over- and under-appreciated.  His numbers are RIDICULOUS – (22 ppg, 12 rpg, 12 apg this year), but he is such an enigma.  And, he is notorious for stat-padding, which is HIGHLY hateable.  He is also kind of weirdly aggressive and kind of strange in the “heat of battle,” which leads to hateability.  While I could hear arguments to be higher,  I love his competitive fire, and he is obviously one of the best pure athletes to ever play the game, so he’s certainly fun to watch.   This seems like the right spot because, who knows anything for sure with Russ?!?

10). LeBron James – To be honest, for the best and most visible player in the world to only be #10 on this list is kind of a feather in LBJ’s cap.  And, I have a lot of LeBron defending in my past.  But, there are some things that cannot be ignored.  The “King James” thing may have been a marketing creation, but it was annoying.  “The Decision” was kind of an innocent mistake, but it

happened.  And, now this new LA chapter in his life where he seems to want to be some sort of Renaissance Man or Business Mogul or whatever it is he’s trying to make us think he is now is not helping.  Plus, he seems to have an opinion on EVERYTHING nowadays…which doesn’t help.  So, ya…hateable.

9). Draymond Green – This another one that is just an homage to “objectivity” because I enjoy Draymond, the player, and probably don’t hate Draymond, the dude, as much as I should.  But, the point remains that he is a dirty player with an ugly jumpshot who played on a BS team that was easy to hate.

8). Chris Paul – This one might be more personal because I simply can’t stand Chris Paul, but objectively, the dude is hateable, so he belongs on this list.  He always has a punchable look on his face, is quietly one of the dirtiest players in the league, and always seems to just be kind of a d*ck.  He’d be higher on my personal list, but I’m beholden to fact here, so #8 is where he falls.

7). Kevin Durant – Part of me feels bad for Durant because he seems like a decent dude deep down, but wow is this dude sensitive!  The rabbit ears, the “if you can’t beat them join them” mentality, the crazy fake Twitter accounts, the ridiculous feud with Michael Rapaport (where he seemed to be quite bigoted), and even the weird pink backpack in college.  Weird isn’t hateable, for sure.  In fact, I like weird.  And, sensitive is probably a positive trait if it doesn’t manifest itself in insecurity and hatred.  But, this dude just seems like kind of a mess, and not totally in a sympathetic way – very much in a hateable way.

6). Donovan Mitchell – The evidence for Mitchell’s hateability isn’t quite as vast as some of the guys who are ahead of him on this list, but he’s only been around and barely relevant for a couple of years.  I’d say that Mitchell’s “hateability upside” is elite – he’s just still kind of an untapped talent of hatebility.  But, already, he’s been a total baby (trying to keep this relatively clean for the kids out there) about multiple things (the Rookie of the Year, the Gobert Covid thing, every single time he drives the lane…), so he still clocks in here at #6, so good on him.  Sky’s the limit, Donnie – you have a shot at the GOAT.

5). Grayson Allen – The only reason he isn’t at or near the top of this list is because he just isn’t all that good and, therefore, kind of irrelevant.  But, his hateability totally transcends his mediocrity…which is quite impressive, to be honest.  First of all, his name is Grayson.  Second, he’s very “Florida.”  Third, he’s some rich kid who went to a very expensive elementary, middle, and high school whose mission statement is:

“Providence School prepares its students to be boldly Christian and unquestionably academic servant leaders who change the world.”

Fourth, he went to Duke.  Fifth, at Duke, he decided that he would just start randomly tripping people during games.  And, then when it got national attention, he did it AGAIN!  This guy has ELITE hateability that is only held back by his lack of basketball ability.

4). James Harden – Where to start with Harden.  Again, I generally like “weird,” but this dude is the bad weird.  The weird where he just doesn’t give a crap.  For all the heat LeBron and Durant got for forming “super teams,” Harden seems to get a pass.   Plus, the dude’s penchant for strip clubs and insane parties and getting fat.  Don’t get me wrong, I don’t hold partying or getting fat against anyone (I’m no hypocrite), but this dude seems to take it a little far – if you are to believe anything you read.  But, it’s also his on-court stuff.  His illegal stepback jumper.  His ridiculous leg motions to “draw a foul.”  And, his absolute aversion to playing any defense whatsoever.  It also doesn’t help that there are people trying to defend his defense by saying absurd things like “he’s actually really good if you look at the advanced stats of him in the post and blah blah blah.”  No, the dude SUCKS on D because (a) he’s not good enough and (b) he doesn’t care AT ALL.  Oh, and F that beard.  Highly hateable!

3). Trae Young – Like Mitchell at #6, Young is both the present and the future of hateability.  He’s still very inexperienced and has played in exactly one playoff series, but this dude is going places.  And, he’s got the rare combination of (a) actual hateable things, like his punchably cocky SMUG looks (b) shallow hateable things, like his hateable hair or lack thereof, and (c) totally hateable game where he has puts up empty numbers (a la Westbrook) and plays ABSOLUTELY NO DEFENSE (a la Harden).  He’s the total package of hateability and could be heading for loftier heights as his career goes on.  Good luck, Trae, we’re all rooting for you!

2). Steph Curry – It is really, REALLY hard for me to make a list of hateability and not have Steph as #1, but that should tell you just how tough the competition is right now.  Steph defines one of the world’s worst personality traits – SMUG!  He might be the most punchable athlete on the planet right now, and it doesn’t help that everyone loooooves him.  Sure, his offensive game is great and REALLY fun to watch, but that almost makes him more hateable because I find myself liking to watch him and then I see him be him and I hate myself for liking it.  And, maybe the worst part is that he’s got a lot of things working AGAINST his hateability – he’s been an underdog, he’s fun to watch, he seems media savvy and whatnot.  Which undergirds the whole hateability argument because we should LOVE him…but, we don’t.  We definitely don’t.  Smug…

1). Kyrie Irving – In no surprise to Kyrie himself, Kyrie ends up as #1 on a list.  Any list.  And, since no one can do Kyrie justice but Kyrie, I’ll let him make the case in his own words:

“Basketball isn’t a game; it’s an art form.  You master the fundamentals so you can forget ’em, so you can improvise and just concentrate on what really matters:  getting buckets.”

“I knew that I didn’t need LeBron, but he needed me.”

“No alarm clock needed.  My passion wakes me up!”

“If you’re very much woke, there is no such thing as distractions.”

“I went to my agent and told them, ‘I want to be on another Disney show.'”

“Draft day is a hectic day, especially for draftees and, more or less, for management.”

“I do not talk to Pawns.  My attention is worth more.”  [then, after getting fined for not talking to the media]  “I pray we utilize the ‘fine money’ for the marginalized communities in need, especially seeing where our world is presently.  I am here for Peace, Love, and Greatness.  So stop distracting me and my team, and appreciate The Art.  We move different over here.”

“‘Grease is an awesome movie.  I wish they’d make a new one, more for our time.  The graphics are terrible when you look back on it.”

If you want more, just google “kyrie a**hole.”  You’ll get all the evidence you need.  Congrats, Kyrie, you win again!  You the smartest, coolest, and wokest dude in the 21st Century that actually believes that the Earth is flat…literally.

NOTE:  If the NBA seeds hold, the Sixers will be facing SEVEN of these guys during the playoffs.

In between the lines

A few stats- Tobi is averaging 25 points in the playoffs, up more than five from the regular season. He’s also pulling in 10 boards per game. Ben recorded a triple double and hit (quadruple checks notes) over 50% of his free throws. Seth dropped 30 (with only three 3’s) and Maxey continues to prepare himself for the role of the difference maker in an upcoming playoff game. Also, it’s always nice to have single-digit turnovers after the BB era.

The best from online

Today, I received medical advice via video from a doctor- the esteemed Dr Bartolozzi, to be specific. Normal for these COVID times, right? It was about a slight meniscus tear, a relatively normal injury. However the diagnosis was not for myself, nor for anyone in my immediate family. It was for a person that I have never met (but admittedly care about very deeply). Prior to watching the video, I flip-flopped between ‘I have to watch this ASAP’ and pushing it off for fear of the unknown.

This is still normal, right? Probably not. But nothing is normal about being a sports fan, particularly one from Philadelphia. There’s no chill, joy is fleeting and there is an ever-expanding sense of doom. However, the good doctor seemed to be hinting at good news.

Here’s the bottom line- and what I will be repeating to myself (even if this is one of those night I’m wavering): Trust the Process, and that Jo just needs 2+ weeks of rehab. Let’s worry about it then. If we cannot beat the Hawks without Embiid, we aren’t beating the Nets with a completely healthy Jo.

But the bottom, bottom line- If Jo is not okay come the ECF, I’m coming for your medical license Dr Bartolozzi.